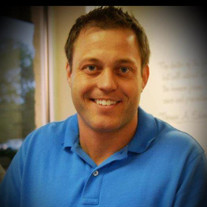 Obituary Baron Gable Holt, born August 29, 1981 passed away on June 21, 2015 in Jacksonville, Fl. If one word could describe Baron, it would be faithful..to his God, his patients, staff, friends and family. He had recently returned from a Christian retreat in Guatemala and his staff commented that he was even more connected to his faith than ever before.He graduated from WSCC, Carson Newman College with a degree in Biology Pre Med, and Palmer Chiropractic School and owned his own practice in Raleigh, NC; Revolution Chiropractic, and had just celebrated his 5th Anniversary. He was a member of Maximixed Living and credited his helping of others from the teachings of Drs. Ben Lerner, Greg Loman, and Zane Sterling.Baron devoted his life to helping people unlock their true healing potential through chiropractic and lifestyle change. He was a sought after speaker and had the privilege to work with Olympic athletes as well as UFC Fighters. He was involved with his Summit Church family, participating in and contributing to several mission endeavors and local fund raising events. He enjoyed competing in triathlons, hunting and for relaxation, read every book he could find on spiritual and motivational self improvements.Baron was the grandson of Jim and Helen Brock and George and Dorothy Holt. He leaves behind a daughter, Haley, age 3; parents: Janis (Richard) Dixon and Gary (LeeAnne) Holt. Brothers: Keven (Candi) Wiley and Andrew Swann. Nephew: Sebastian Wiley, Aunt: Vicki Haseman, cousin: Rachel Haseman; Uncle: Frank (Cathy) Holt and many cousins. His staff: Brigittte Spurgeon, Tamara Hale and Danielle Boisvert, and numerous friends that he loved and considered family. Plus two adored furbabies: Aspyn and Nada.Visitation with the family will be Saturday, June 27, 2015 from 1:00 until 3:00 PM at Alder-Mayes Funeral Home with funeral services to follow at 3:00 with Rev. Hal Kirk and Rev. Donna H. Brown officiating. Entombment will follow in Jefferson Memorial Gardens.A memorial service will be held at a later date in Raleigh, North Carolina.To help honor Dr. Baron's life and work, Revolution Chiropractic is setting up a memorial scholarship fund to assist underprivileged patients receive the care they need. In lieu of flowers, memorial contributions may be made to the Dr. Baron Memorial Fund at any Suntrust Bank. Cemetery Details Jefferson Memorial Gardens 812 E. Broadway Blvd. Jefferson City, TN, 37760 Visitation JUN 27. 1:00 PM - 3:00 PM Alder-Mayes Funeral Home 4524 W. Andrew Johnson Hwy. Morristown, TN, 37814 Funeral Service JUN 27. 3:00 PM Alder-Mayes Funeral Home 4524 W. Andrew Johnson Hwy. Morristown, TN, 37814 To send flowers to the family or plant a tree in memory of Baron Gable Holt, please visit our floral store.

Obituary Baron Gable Holt, born August 29, 1981 passed away on June 21, 2015 in Jacksonville, Fl. If one word could describe Baron, it would be faithful..to his God, his patients, staff, friends and family. He had recently returned from a Christian... View Obituary & Service Information

The family of Baron Gable Holt created this Life Tributes page to make it easy to share your memories.

Send flowers to the Holt family.