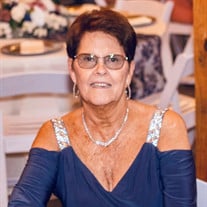 Carol Worosilla Wasley, 75 , of Knoxville, TN passed away September 6, 2021 at home after battling aggressive pancreatic cancer. Born in Pittston, PA on November 15, 1945, she was the daughter of the late Joseph Worosilla and the late Rose Jacobchik Worosilla and the sister to the late Richard Worosilla. She graduated from West Pittston High School in 1963, and attended Nesbitt Nursing School in 1964. Carol was a Medical Assistant for the Guthrie Clinic in Sayre, PA for 20 years. After moving to Florida, she started her State Farm career in 1993. She achieved her Associates In Claims designation, and then her Florida 620 license. Carol became a Senior Claims Processor until retiring in 2006. Carol was a loving and devoted wife, mother, and grandmother. Her hobbies and interests were landscaping, home decorating, reading books, shopping with friends, and visits to see her grandchildren. She is known by ones who knew her to be strong willed, intensely dedicated to her family and career, made an amazing lasagna, and a classy lady overall. Surviving are her husband of 57 years, John Kent Wasley; daughters Beth Wasley Benjamin of Kodak, TN, and Michelle Wasley Wallace of Knoxville, TN; Grandson, Kent Wasley Benjamin and his wife Ashley Dean Benjamin of Greensboro, NC; Granddaughter, Kate Ashley Benjamin and her fiancé’ Austin Hukle of Dekalb, IL; Granddaughter Sydney Wallace Connley and her husband Tyler Connley of Sevierville, TN; cousin like a sister, Julie Malik of NYC; and beloved nieces and nephews. Carol’s family is hosting a Celebration of Life lunch at the River Grille in Wilkes-Barre, PA on September 11, 2021. A private entombment will be at Mount Olivet Cemetery in Carverton, PA. In remembrance of Carol Worosilla Wasley’s life, the family asks in lieu of flowers any charitable donations be made to your local pet rescue in honor of the beloved cats she adopted over the years; Cinder, Bailey, and Ozzie.

Carol Worosilla Wasley, 75 , of Knoxville, TN passed away September 6, 2021 at home after battling aggressive pancreatic cancer. Born in Pittston, PA on November 15, 1945, she was the daughter of the late Joseph Worosilla and the late Rose... View Obituary & Service Information

The family of Carol Worosilla Wasley created this Life Tributes page to make it easy to share your memories.

Send flowers to the Wasley family.