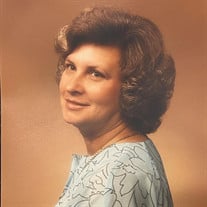 Glenna Fay (Ousley) Hamer of 77 Years, 10 months, 7 days, gained her heavenly, precious wings on January 25, 2022. Born on March 18, 1944 in Hippo, Floyd County, Kentucky. Her parents moved the family to Plymouth, Ohio in 1952. When she was 20, she met Kenneth R Hamer from Norwalk, Ohio when they were working at RR Donnelley. They married on June 14, 1964. From this union, had 2 children. They also had become owners of the Triangle Motel in 1973 in Willard, Ohio where they run and operated for 5 years. The lived in Mansfield in 1978. Later in 1979 moved to Morristown, Tennessee. Where they found their forever home and a beautiful view of the mountains they fell in love with. Glenna was brought up in the Old Regular Baptist Church. Where her father later became ordained when they were members of Little Rebecca Church, but later in her life at the age of 62, she was baptized. Glenna was a loving, loyal wife, mother, grandmother, aunt, and friend. If you knew her, you were blessed with her love of sharing a hug and her hospitality. She enjoyed life, family members and friends. Glenna was always there to brighten the lives of others. She wanted very little, but she gave so much. She never met a stranger. She was preceded in death by maternal grandparents: Georgie, and Amanda (Bailey) Hicks, step grandfather Alfred Hicks. Paternal grandparents: Rev. William Hagar, and Sarah A. “Sallie” (Hughes) Ousley. Parents: Elder John D., and Rhoda (Hicks) Ousley. Her husband of 39 years, Kenneth Raymond Hamer. Brothers-in-law, Frank Krupa, and Donald Herring. Leaving behind a son, Brent (Laura) Hamer, daughter, Kimberly (Robert) Lowry. Grandchildren, Hannah (Courtney) Kinkead, Tanner Kinkead, Charlie Fitzgerald and Andee Fitzgerald. Siblings: Eleanor Herring of Mansfield, Ohio. Frank (Ruth) Ousley of Plymouth, Ohio. Claude P. (Janet) Ousley of Plymouth, Ohio. Thelma (Larry) Oneil of Mansfield, Ohio. Clarence (Nancy) Ousley of Shelby, Ohio. Brothers-in-law and sisters-in-law; Robert Hamer of Norwalk, Ohio. Gerald Hamer of Garden City, Michigan. Martha (Hamer) Huffman of Norwalk, Ohio. Paul (Onie) Hamer of Cleveland, Ohio. The family would like to send a special thanks to Regency Memory Unit and the Morristown-Hamblen Healthcare Systems third floor. The family will have an open viewing from 8:00-5:00 p.m. at Alder Funeral Home, Friday, January 28, 2022 and family and friends from 10:00 a.m.-12:00 p.m. at Panther Springs United Methodist Church, Saturday, January 29, 2022 with a service to follow at 12:00 p.m.; followed by graveside service at Emma Jarnagin Cemetery. Arrangements by Alder Funeral Home

The family of Glenna Fay Hamer created this Life Tributes page to make it easy to share your memories.

Send flowers to the Hamer family.