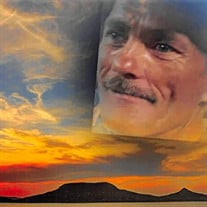 Ricky Dean Hensley, Sr., age 52 of Washburn passed away Friday, July 23, 2021. He was a member of Liberty Missionary Baptist Church of Thorn Hill. He had recently retired from FSC Company in Arizona which to him was the best job because it let him travel all over the U.S. and meet all kinds of new people. He was preceded in death by his father Gillis Coffman of Bean Station, grandparents; Clarence and Pauline Coffman of Bean Station, John and Bessie Hensley, Jack and Axie Dalton all of Thorn Hill; sisters, Jackie Dalton of Bean Station and Tonya Repass of Rutledge. He is survived by his wife Pamela Jean Hensley of Washburn, sons; Ricky Jr. “Scooter” (Jennifer) Hensley, Cody Davis, Corey Hensley all of Bean Station, Tyler (Lindsey) Hensley of Washburn, Tyler (Nicole) Davis of Morristown and Dalton Hensley of Rutledge, daughter; Niki and Billy Ratliff of Washburn, seven grandbabies; Caden, Emily, Trey, Kaylee, Carson, Kinzley and Baylee. Parents; Delbert and June Dalton of Thorn Hill, sisters; Kimberly (Stacey) Coffman of Sneedville, Rhonda (Scott) Collins of Rutledge, Vicki Coffman (Joseph) Williams of Mooresburg, and Jennifer (Joey) Coffey of Thorn Hill. Several nieces, nephews, aunts, uncles and cousins. The only brother that he ever knew, Tim Arnold of Washburn and a few very special people; Mario “Pwee” Jimenez of Deming, New Mexico who he love just like a son, Chuck “Daddy Chuck” Sabb of Phoenix, Arizona and Robert “Buffalo Bob” Logsdon of San Antonio, Texas all in which he worked with out on the road for years that became more like family than friends. The family is having a Celebration of Life service for Rick Saturday, July 31, 2021 at 4:00 PM at the Thorn Hill Community Center. After the service the family along with anybody that would like to join will be spreading his ashes so that way he can continue on his journey just like he wanted. Come and help us celebrate his amazing life and join us as we release him back into the wind. Arrangements by Alder Funeral Home

Ricky Dean Hensley, Sr., age 52 of Washburn passed away Friday, July 23, 2021. He was a member of Liberty Missionary Baptist Church of Thorn Hill. He had recently retired from FSC Company in Arizona which to him was the best job because it let... View Obituary & Service Information

The family of Ricky Dean Hensley Sr created this Life Tributes page to make it easy to share your memories.

Send flowers to the Hensley family.