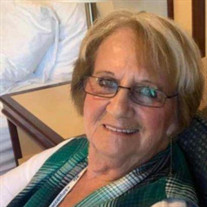 Sandra Taylor, age 73, passed away at Turkey Creek Medical Center in Knoxville on Thursday, December 2, 2021. She was born and raised in Hamblen County where she lived her entire life; she resided in Talbott. She was preceded in death by her husband Donnie Taylor, her daughter Lisa Taylor-Bell, her parents James and Edith Rickard, and her brothers Tommy and John Rickard, and brother-in-law William “Bill” Dougherty. She is survived by her son Scott Taylor and his ex-wife Amy Lovdal-Taylor, her grandson Mark “Eric” Bell and his wife Kaila Tower-Bell, her great-grandchildren Anna and Eric Bell, her sisters Teresa Dougherty and Debbie Shaver, her son-in-law Charles “Lester” Hannah, her sister-in-law Marie Rickard and her brother-in-law Eddie Shaver. She is also survived by several nieces and nephews, great nieces and nephews, and two great-great nephews. She had a very large extended family whom she loved very much. She is also survived by her beloved pets Billy, Maggie, and “Pootie.” Sandra was an original member of Morristown Baptist Tabernacle where she particularly enjoyed her friendship with the founding pastor’s wife, Bryte Benfield. She was a graduate of Morristown High School and she was retired from Koch Foods where she had worked for 43 years and where she had many, many friends and co-workers whom she loved. Sandra loved to travel and had taken many cruises to numerous Caribbean Islands, as well as trips to visit her son on several occasions on the West Coast (Los Angeles, Portland, and Seattle). She had also traveled to the province of British Columbia, Canada to the cities of Victoria and Vancouver. Sandra was also known for her love of cooking and was always making big meals for her family. Some of her most cherished memories were just sitting around the table with her loved ones, sharing a meal, having a cup of coffee, and chatting. The family will be receiving friends and family at Alder Funeral Home in Morristown (4524 W. Andrew Johnson Hwy.) from 12/noon to 2pm on Saturday, December the 11, 2021 with an official service starting at 2pm. She will be laid to rest the following Monday in Hamblen Memory Gardens. The family requests that facial coverings be worn during these services. Arrangements by Alder Funeral Home

Sandra Taylor, age 73, passed away at Turkey Creek Medical Center in Knoxville on Thursday, December 2, 2021. She was born and raised in Hamblen County where she lived her entire life; she resided in Talbott. She was preceded in death by her... View Obituary & Service Information

The family of Sandra Geselle Taylor created this Life Tributes page to make it easy to share your memories.

Send flowers to the Taylor family.