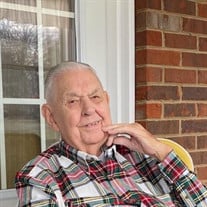 Thomas Frank Manning (Tommy), Age 97, of Talbott, TN passed away February 9, 2022, at home. Tommy was a member, deacon, and home preacher of Powerhouse Baptist Church in Morristown, TN. He was an Army veteran during WWII in Germany. Tommy was... View Obituary & Service Information

The family of Thomas "Tommy" Frank Manning created this Life Tributes page to make it easy to share your memories.

Send flowers to the Manning family.